As suggested in an earlier post, much of the Genesis narratives relating to the patriarchs/matriarchs serve as a mythical paradigm for what befalls the Jewish People in Exodus and beyond.  “The stories of the patriarchs are to be taken as signs for their decedents” (Ma’asay Avot Symon LeBanim  מעשה אבות סימן לבנים).

It is in this context that we can best understand the multiple accounts of Abraham and Isaac going to a strange land (Egypt and Gerar respectively) as a result of a famine (Genesis 12: 10 26:2), causing a plague on the ruler (Pharoah and Avimelech respectively) and leaving with much wealth and prestige (Genesis 13: 2 15: 14 26: 12) …. A clear parallel to the latter Jewish People who, as 70 souls (Exodus 1: 5) went down to Egypt because of a famine, caused plagues to fall on Egypt and its Pharaoh and left with great wealth (Exodus 11: 2).

What’s missing from these patriarchal premonitions is the subjugation and internment that the Jews suffered in Egypt.  These elements appear only in the Jacob story.

In many of their exiles, the Jews were expelled or killed.  Jews being forcibly held as  in Egypt and later in the Soviet Union occurred only with one patriarch.

Jacob was the first Refusnik.

25 And it came to pass, when Rachel had borne Joseph, that Jacob said unto Laban: ‘Send me away, that I may go unto mine own place, and to my country.
26 Give me my wives and my children for whom I have served thee, and let me go; for thou knowest my service wherewith I have served thee.’ Genesis 30: 25-26

Through repeated lies and tricks, it was clear that Laban had no intention of permitting Jacob, his wives and family to leave (Genesis 31: 41).

41 These twenty years have I been in thy house: I served thee fourteen years for thy two daughters, and six years for thy flock; and thou hast changed my wages ten times.

What makes the refusnik component of the exile/exodus model so important, is that unlike the other components (famine, plagues, riches and freedom) which are outside of the control of the protagonists, it is in experiencing physical and economic abuse and showing an unwillingness to make a deal that the refusnik finds his/her own redemption and serves as an inspiration to us all.

Jacob did not settle.  Even at great physical cost, he did not compromise.  Jacob was the first refusnik.

In a previous post a journey – russia to the promised land, I describe my family’s trip to the Soviet Union in the summer of 1974. On that trip, our first stop was Leningrad and the first refusniks that we met, the first refusniks to host us at their home, were Ida and Aba Taratuta.  We had not heard from the Taratuta’s  all these years until this summer, when in my capacity as President of PEF Israel Endowment Funds I received a receipt from one of the 1,000 plus charities we support in Israel: Remember and Save.  As I reached the bottom of the letter, my heart skipped a beat…. It was signed by Aba Taratuta who has established this amutah (charity) to archive the Jewish Aliya movement in the USSR.

Two weeks ago, I traveled to Haifa and met with Ida and Aba….  my first refusnik.

I took this video in which the Taratutas describe our family’s visit as well as the various jobs they were forced to take after being fired from their respective positions as government translator (Ida) and astophysicist (Aba).  [Once they were fired a refusnik had to find other work so as not to be arrested as a parasite.]  The Tratutas were refused exit from the Soviet Union for 15 years.  After arriving to Israel, they moved to Haifa were Aba became a professor of astrophysics at the Technion.   When Aba retired from the Technion he became a math teacher in an Israeli High School. In retrospect, he says, teaching High School math was more taxing than being a refusnik in the Soviet Union!

Aba has established the Remember and Save organization to collect, catalog, archive and make available the records of the alya movement from the Soviet Union from 1967-1989, including :

Aba is concerned that time is running out and that refusniks are passing away and their memories and artifacts are being lost.  Just as Jacob commemorated his struggle with a monument to bear witness, Aba is working to preserve the memory of the soviet refusniks as an important academic resource and as an inspiration for us all.

Here are some pictures I took (then and now). 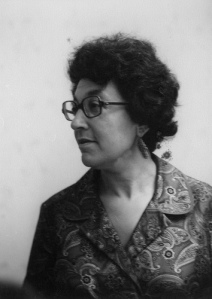 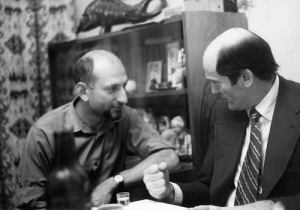 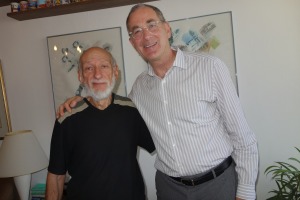 * I have searched, unsuccessfully for corroboration in Rabbinic literature or the commentaries for what I believe is  an obvious parallel between Jacob’s personal exodus from Charan (servitude, internment, chase before a river/sea and final release to the homeland) and the national Exodus.  I do note that the Haftora for parshat Vayetzeh is from Hosea 12 and begins by establishing just such a parallel  (for Ashkenazim) with verse 13-14.
13 And Jacob fled into the field of Aram, and Israel served for a wife, and for a wife he kept sheep.
14 And by a prophet the LORD brought Israel up out of Egypt, and by a prophet was he kept.