introducing the LoBa Bramulke by Vashti® 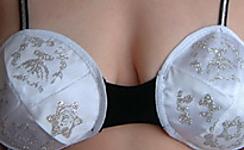 In a move that took fashion industry pundits by surprise, LoBa Kippa today announced its entry into the lingerie market.  Noticing a spike in sales of its popular Loba Kippa 3-pack the Loba Google analytics team realized that women were buying one loba Kippa for their husbands and keeping two for themselves. A closer reading of Megillat Esther confirmed what women have known for over two thousand years… That “Lo” means “Lo” and when a woman says she’s not coming she means Lo Ba.. I’m not coming!  Taking the LoBa message to feminists and cross-dressers, the LoBa Bramulke supports an individual’s inalienable right to stand up to sexual exploitation and to anointed kings and saviors.

The king Ahasuerus commanded Vashti the queen to be brought before him, but she came not (Esther 1:17)

The LoBa spokesperson would not reveal any further details relating to the bramulke other than to say that due to the organization’s aversion to magical thinking  Loba intimate wear would provide a stark alternative to the Miracle Bra™ and would provide consumers with extra support and lift using hard work, sustainable materials and other natural means.

Furthermore the bra like the loba movement itself will reveal universalism and visions of eschatological harmony as no longer fashionable. The loba bramulke will lift up the related parties while enthusiastically preserving and accentuating the natural contours and healthy cleavage necessary for independent movement and divergent activities.

Asked if there is any competition, the spokesperson recalled that in the’60s there was a lobra movement, but that today LoBa is in a world unto itself.

About LoBa Kippa – LoBa is the next big movement in Judaism.  It’s a growing group of thought leaders who believe that while the idea of a Savior and Final Redemption have played a role in the past, in today’s world of religious fanaticism, Messianism has become the most destructive concept shared by the world’s monotheistic religions.

LoBa  (לא בא) is Hebrew  for “not coming” and the LoBa store is for those of us who are not waiting. We’re not waiting for the Mashiach, the Messiah, the Second Coming, the Caliphate, the hidden Mahdi, hidden Imam or any other end-time magical solution.

Based on lyrics from a popular Israeli song our products proclaim that the Mashiach isn’t coming, he’s not even calling…   משיח לא בא – משיח גם לא מטלפן

LoBa customers reject any theology or ideology that wishes to change the world with a bang.

We’re not a negative group, we just reject those who feel empowered to disregard the rules of society and rights of others in order to bring a new age or end-time. Rather than wait, we engage in making the world a better place one step at a time and for its own sake.

Our products make a great gift for a loved one.. including yourself.  And you don’t have to be Jewish to love LoBa.  It’s just that we Jews introduced the world to Messianism, so it’s only fair that we lead the way in getting rid of this unhelpful and oh too many times, destructive idea.

2 responses to “introducing the LoBa Bramulke by Vashti®”