Passover excels in the variety and depth of its symbols. Some Pesach symbols, such as Matzo are biblically ordained and interpreted.

Other symbols, like the hard-boiled egg, are place-holders for still other symbols (the Festival Sacrifice), but are open to further interpretation.. such as re-birth, cycle -of-life, mourning for the Temple and my father’s favorite: Jews are like an egg…the longer you cook us… the tougher we get!

The symbolic activities mentioned in the famous Four Questions are partially justified to elicit …. symbolic-questioning!

One is tempted to assume that like two Jews… for every pair of Passover Symbols, there are at least three opinions!

You’d think that if a symbol was introduced in our lifetime, that there would be consensus as to its meaning and origin. No such luck!

While I was perusing a newly purchased Workman’s Circle Activist “Hagodeh” I learnt the real story of the Orange on the Seder table….

I researched this further. Turns out Susan Heschel wrote an article on the metamorphosis of her recently introduced symbol…

“After a few years, I discovered a strange and disturbing phenomenon: strangers started telling me that they were placing an orange on their seder plate because they had heard a story about me. The story went like this: After a lecture I delivered in Miami Beach, a man stood up and angrily denounced feminism, saying that a woman no more belongs on the bimah than an orange belongs on the seder plate. After hearing this tale dozens oftimes, all over the country, I realized that my story had fallen victim to a kind of folktale process in which my custom was affirmed but my original intention was subverted. My idea- a woman’s words- were attributed to a man, and my goal of affirming lesbians and gay men was erased. …..
While I am delighted by any effort to recognize women in a Jewish context, I worry about the process that led from my original goal to the present, more watered-down version. I certainly support the inclusion of women and the empowerment of women, but nowadays, outside the Orthodox community, that is hardly radical or controversial. What does remain a deep and intractable problem, however, is the pervasive homophobia in Jewish life. The issue is not merely one of inclusion but also one of removing a toxin that has infiltrated our minds and souls.”

As important as Susanna Heschel’s insight on gay rights in Judaism might be, I find her real-time insight into how, especially controversial and uncomfortable traditions and symbols can become “watered down” and “subverted” fascinating.

The metamorphosis of her custom in just a few years… and in front of our eyes is an amazing showcase of how traditions are transferred from generation to generation.. and isn’t that what so much of Pesach is about?

Leftover #2 Too many parties

The following quote is from: A Survivors Haggadah, written, designed, and illustrated by Yoseph Dov Sheinson with woodcuts by Miklos Adler, both having been among the She’erith Hapletah, the Remnant that escaped, Originally published in Munich 1946 for the First Passover after liberation by the US Army of occupation. Jewish Publication Society, Philadelphia 2000 pp 33-35.

In wrenching detail it integrates into this Haggadah how the Holocaust survivors are lobbeyed by shlechim of the different Israeli political parties to join a party…. It seems as though nothing has changed… ledor ledor…

And after they study for a time, they grow clever; and a child behaves like a man of seventy who has opinions about how the world should be run, or how or when to settle the [Promised] Land and manage affairs of state. The children argue, and all are eager to advance their own positions and views, so that brothers are set apart, unable to agree on the question of the State [of Israel], unable to sit peacefully together.

Meanwhile the sons from our Holy Land [Palestine] shed their blood in an effort to bring survivors to Israel: for the gates of the Land are shut. No one can go in or out. And so emissaries go out from the Land [Palestine] to the surviving remnants with all kinds of keys to classify them and unlock their hearts. The emissaries come to meet the remnants, and when they meet Israel, they ask: Which group do you belong to? But the survivors do not understand them and wonder at the question. And even members of the [Jewish] Brigade in Italy reply: What is the meaning of this? Are we not, all of us, Israel? The emissaries say: You must have been sleeping for seventy years, because the unity of Israel is a fable. It’s no longer possible; each person must join a group. The remnants answer: But was not all of Israel slaughtered together? Is not all of Israel to rebuild the land together? The emissaries say: The unity of Israel is a fable. The land of Israel is being built by different factions. (Hebrew: Miflagot)

The remnants answer: We all belong to one group, we are Israel, all of us, and we have no interest in factions.

The emissaries say: That is impossible; the reality of Israel requires it.

One could argue: This rivalry is like a rivulet; just as the rivulet flows down, riving the ground and irrigating it to make it fertile, so does division divide Israel and bestow blessings on it. For it prepares the ground for all kinds of beliefs, so that people can go and die for the tip of every letter in their own torah. Thus rivalry breeds strength which increases the might of Israel.” 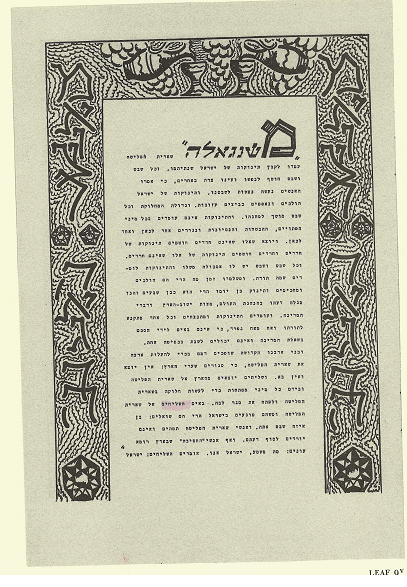