“The entire Torah is for the sake of the ways of shalom” says the Talmud (Gittin 59b) so we should not be surprised that the Torah shows an aversion to weapons.

And if you make Me an altar of stone, you shalt not build it of hewn stones; for if you lift up your sword upon it, and profane it.

Rashi comments: and profane it Thus you have learned that if you wield iron upon it, you have profaned it, for the altar was created to lengthen man’s days, and iron was created to shorten man’s days [because it is used to make swords]. It is improper that the “shortener” be wielded over the “lengthener” (Middoth 3:4). Moreover, the altar makes peace between Israel and their Father in heaven. Therefore, the cutter and destroyer shall not come upon it. The matter is a kal vachomer [an argument from a lenient law to a strict law] -if [concerning the] stones, which neither see, hear, nor speak, because [of the fact that] they make peace, the Torah said, “You shall not wield iron upon them” (Deut. 27:5), how much more [are we certain that] one who makes peace between husband and wife, between family and family, between man and his fellow, will have no troubles befall him! [from Mechilta]

The altar was to be made of natural “found” stones.

In a variation on this theme, all of the stone that was hewn many years later to build King Solomon’s Temple were to be cut off-site:

This variation against cutting stones at the Temple-site introduces a new element to the aversion with weapons.  Not only do weapons shorten, cut and destroy… they also make noise.   In striking contrast to the noise of violence, the alter and the Temple conveyed the peace and quiet of Shalom.

It is an powerful visual to think of a building being built in silence. As a poet in the 19th Century wrote:

“No workman’s steel, no ponderous axes rung;
Like some tall palm, the noiseless fabric sprung.”

In still one more variation on the theme of concealing the weapon is the notion and inherent value of  irregularity and serendipity.    The Altar after all was made of found objects.  Peace comes  when we live and let live…  when we grow to accept that which we cannot control with our tools and weapons… when we accept, nay embrace that which is alien to us.

The fact that all of the stones for the Temple had to be shaped off-site, meant that either the builders were great craftsmen, or once in a while they goofed.  According to the Midrash[i], the whole Temple was complete except one opening at the top, over the holy of holies.  The opening was irregular (pick your synonym, different, quer, strange, etc) and none of the pre-cut stones would fit.  Finally, one of the builders recalled a stone that had been rejected during construction and discarded, which was retrieved and became the cornerstone of the Holy Temple…

The stone which the builders rejected is become the chief corner-stone. (Pslams 118: 22)

It is the home and the Shabbat table which now brings peace between Man and Woman, humanity and God and so it is at the Shabbat table, in the cutting of the Challah that the Torah’s aversion to weapons survives.[ii]

My favorite solution came from what i imagine was an enterprising knife-smith who adapted and modified the pocket knife (also known as a jackknife[iv]) and created a Holy Shabbos pocket knife where the offensive blade could be concealed when not in use.

Pictured, is a rare folding Shabbat Challah knife, set with ivory or bone, and inscribed in Hebrew with the words “Holy Sabbath” Length 14cm. [v]

I have a collection of these knives which started when my Grandmother (Henrietta Stern) gave me hers and I hope to collect enough so that I can distribute to my children in grandchildren one day..

Whatever custom you follow (or choose to adapt) cut your Challah well….  There are ancient lessons to be learnt.  Lessons about the overwhelming importance of peace, the sounds of silence, the miracle of serendipity and the need  to honor things and people that don’t appear to fit in.

“The story goes that when the temple of Solomon was in the course of contruction all the stones sent up from the quarry below were practically of the same size and shape.  But one day a stone was found different from all the rest, and the builders said, “There is no place for this stone.  There must be a mistake.” So they rolled it to the edge of the cliff and tumbled it down into the valley of Kedron below the temple area.  As the years went on (Solomon’s temple was seven years in building), they were finally ready for the chief cornerstone, so they sent down the order for it.  They were told, “You must have it there.  We sent it long ago.” Their search proved fruitless.  And then an old workman said, “I remember now.  There was a stone different from the rest.  We thought there was no place for it and tumbled it down to the valley below.”  So as the story tells us, they went down the valley of kedron and there they found the stone, now covered by lichens and debris – the very stone the builders rejected.  So now they had to hoist it to the top of the cliff, then back to the platform and put it into place.  It fitted perfectly. The stone the builders rejected had become the head stone of the corner.

[ii] It should be noted that there is a morbid custom to remove all knives from the table prior to saying the Grace after meals.. (see The Book of Customs,  By Scott-Martin Kosofsky page 21)

“After finishing the meal, one should put away the knives from the table.  The reason for this custom is that there was once a man who recited the Grace after meals with great devotion, and when saying the section Uvenei Yerushalayim, he remembered the destruction of the Temple in Jerusalem, grabbed the knife on the table, and stabbed himself in the heart.”

[iii] Some say this is because the avoidance of using a knife is symbolic of the Biblical story of Abraham who in the end did not sacrifice his son Isaac with a knife when tested by God…. But I prefer the connection with the knifeless alter.

[iv] According to the Norwalk Hour May 31, 1961, the name jackknife comes from the shape of the “J” and describes a pocket knife when it is in the partially opened position… “Jack” is also used to describe things that are smaller than the norm which the pocket knife certainly is.

[v] You can buy it at Ivantiques, a very reputable Judaica store in Jerusalem down the street from the King David Hotel (21 King David St.) where I have purchased a few knives as well as Bezalel Judaica.  According to Ivan Halperin the proprietor and Judaica expert, the knife is a souvenir that was sold to Jewish guests in Karlsbad around the 1920’s -30’s, the folding feature made it easy to carry around. … Granted that it’s called a pocket knife, but does Ivan really think that observant Jews would design a knife to carry on the Shabbat?  I think not.  I stick with my concealed weapon theory… for more images of these folding challah knifes look here. 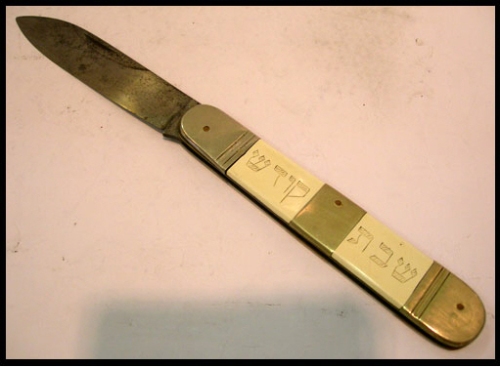