thou shalt not play small

The sin of the Golden Calf was not a sin against God, but rather a sin against man. Theirs was not a sin of idol worship but of hero worship.  It was not God that was being replaced but man, in the guise of Moses.  Moses had disappeared for a rendezvous with an unseen God and these new-Jews had been left alone.  They took Moses as an intermediary with God and the Calf was to replace their mis-taken Moses.

And Aaron said: ‘Let not the anger of my lord wax hot; thou knowest the people that they are set on (or in) evil. So they said unto me: Make us a god (Elohim – alt. power), which shall go before us; for as for this Moses, the man that brought us up out of the land of Egypt, we know not what is become of him. (Exodus 32, 22-23)

Their’s was not a misconception in the form or role of God, it was rather a misunderstanding in the newly defined purpose and powers of man. Theirs was not a lack of faith in God, rather it was in man that they were short on faith.

These newly liberated Jews had missed the point.  They had replaced Pharaoh’s regime with a new regime to be run by this messenger of God, called Moses.  It wasn’t that these small-minded people were bad  רע rather they were just trapped in a bad place ברע .

These survivors were lacking in faith, not in God but in themselves. It was their misconception that a human being of flesh and blood cannot possibly talk face-to-face with God… the ultimate source of power. They did not believe in the spiritual and political power within man, or better yet, they were not willing to accept the responsibility such a belief created.

In the people’s view, Moses must have been a super-man. When Moshe failed to appear they realized that he too was one of them… only a common man. They built themselves another demi-god, not to replace God, rather to replace themselves.

And when the people saw that Moses delayed to come down from the mount, the people gathered themselves together unto Aaron, and said unto him: ‘Up, make us a god who shall go before us; for as for this Moses, the man that brought us up out of the land of Egypt, we know not what is become of him. (Exodus 32, 1)

The Exodus Revolution had proclaimed that you serve only one God… and therefore … and this is the punch line… you serve no object and certainly no man or power produced by man… you cannot live vicariously, not through celebrities, not through heroes … not even Moses. The Exodus Revolution’s credo was that you serve no man, no king, no priest, no angel, no messenger.. You serve only God. You cannot delegate your responsibilities and neither will God. By example, God did not delegate the revolution to Moses nor to an Angel and neither can you. As it says in the Haggadah:

“I will pass through the land of Egypt,” I and not an angel;

“And I will smite every first-born in the land of Egypt,” I and not a seraph;

”And I will carry out judgments against all the gods of Egypt,” I and not a messenger;

Which brings us to playing it large….. I was introduced to the concept of greatness… Gadlut (Gadlus HaAdam) and its opposite; the sin of smallness Katnut  קטנות   when studying Mussar  under the guidance of HaRav Shlomo Wolbe zt”l.

“The beginning of the way of anyone who learns Mussar today needs to be: learn the elevatedness of a human. He must climb the ladder that leads to awareness of greatness.” (quoted from Alei Shur vol I)

Avrohom Eliyahu Kaplan was a 19th century thinker equally influenced by Mussar and Hasidism who I discovered in my mussar days and who writes in poetic terms in his book: Be’ikvos haYir’ah  about the false humility that is the bad place of the worshipers of the Golden Calf.:

It is not pride that holds us back, but rather humility. We are humble and not brash. Our souls are like widows, without anything to lean on or security, without the power of knowledge. A humility not in God’s name is this; rather in the name of laziness that is in despair that is in laziness. It is for the poor who are ‘happy with their portion’.. that is, in their spiritual portion.

It is this same misplaced humility that Nelson Mandela warned against on the day of his inauguration:

Our deepest fear is not that we are inadequate. Our deepest fear is that we are powerful beyond measure. It is our light, not our darkness that most frightens us.’ We ask ourselves, Who am I to be brilliant, gorgeous, talented, fabulous? Actually, who are you not to be? You are a child of God. Your playing small does not serve the world. (click here for actual source of quote)

The question we continually must ask as individuals and as societies: Do we dare to take control of our own destiny or do we leave such things for others, for others who are; comfortably for us, not quite human? In short, do we want to go back to the Egypt of the past where we were slaves, or do we move on to our promised land with the responsibility of freedom on our shoulders?  The sin of the Golden Calf (along with much else associated with precious metals and stones) is not that we want too much, but that we want too little. The sin of the Golden Calf is not of false pride but of false modesty.

Thou Shalt not play small …. neither in life nor in love! 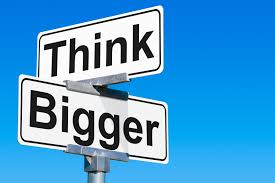 2 responses to “thou shalt not play small”