Rabbi Ishmael’s thirteen rules of Torah interpretation (middot) are well know as they are read every day at the start of the morning service. I personally don’t have a finite number of rules of biblical exegesis but I do have some principles….

First… I don’t like apologetics, in general, but specifically when it comes to the Bible. What is politically, or otherwise, incorrect today is part of the history of ideas when it appears in earlier works. No, we should not take the “N” word out of Mark Twain’s Huckleberry Finn and Tom Sawyer, pretend that George Washington and Thomas Jefferson did not have slaves or expect the Bible to have a 21st Century aesthetic or ethical sense.

If the ideas and enlightened positions we hold dear today have value, it is because we give equal value to the history of those ideas. Hopefully, the ideas that we hold sacred today, will become part of the history of still better, and more refined ideas in the future.

So if I will not apologize for or rationalize less-than-perfect ideas espoused by earlier thinkers whom I hold in high regard… what do I do with these ideas especially if voiced in a sacred text?

Context is clearly important. If the Bible introduces an idea that has not appeared before… (or has not been mainstreamed before) we should take notice. A prime example is the mandated day of leisure for every living being… If the Bible includes a provision or prohibition which was common among its near eastern neighbors, then there is less to note.  If  an institution such as sacrifice appears without even so much as an introduction… we can assume that it was a widely accepted currency of the day, and minimal lessons can be drawn from it’s circulation.  But even if the Bible includes an unsavory institution, such as slavery or the indentured servant, we need to take note of how the bible limits this institution by statute (the Jubilee year of emancipation) or ritual (the piercing of the ear of a servant who embraces his/her servitude). In the history of ideas, context and trends are critical.

And so, after the Bible adjures us to be Holy….  as God is Holy and to pay the laborer on time and embrace the stranger, we can be forgiven if we are disappointed that when it comes to leadership positions, the Bible exhibits such a neanderthal bias against the less-than-perfect. When it comes to serving God, the Bible excludes the handicapped explicitly, and women, without even the courtesy of honorable mention.

18 For whatsoever man he be that hath a blemish, he shall not approach: a blind man, or a lame, or he that hath anything maimed, or anything too long,
19 or a man that is broken-footed, or broken-handed,
20 or crook-backed, or a dwarf, or that hath his eye overspread, or is scabbed, or scurvy, or hath his stones crushed;
21 no man of the seed of Aaron the priest, that hath a blemish, shall come nigh to offer the offerings of the LORD made by fire; he hath a blemish; he shall not come nigh to offer the bread of his God.
22 He may eat the bread of his God, both of the most holy, and of the holy.
23 Only he shall not go in unto the veil, nor come nigh unto the altar, because he hath a blemish; that he profane not My holy places; for I am the LORD who sanctify them. (Leviticus 21: 18-23) 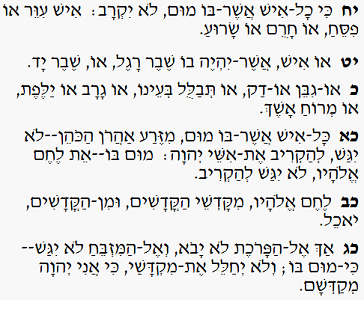 Given the fact that laws protecting the physically challenged were written in our lifetime and that President Roosevelt’s wheelchair was as guarded a secret as President Kennedy’s trysts… it would be anachronistic to call out a 2,000+ year old work such as the Bible…. Let alone try to justify it.

With regard to women, I am always amused that Orthodox apologists try to make a women’s 2nd class Biblical status a complement rather than a sign of the times.

The famous proof text for women’s exclusion from all public affairs is: “the glory of the King’s daughter is within” Psalms 45:14

Women are not to participate in public events of even a spiritual nature, because of modesty (t’zniut) because… here’s the rub… unlike men who have this infantile need to showcase their devotion… women are more spiritually advanced and learned in the inner duties of the heart and don’t need the performance.

The reason I am amused is not because I don’t think that the sexes approach most everything in a different way.. but rather because the argument ignores the fact that Orthodox women, like their Islamic counterparts are literally second class citizens… and all the theological and spiritual arguments to the contrary are just so much whitewash. Take a look at the laws of giving witness… certainly a litmus test of legal standing. And we’re not talking about witnessing a ritual such as a wedding… we’re talking about witnessing a crime or the transfer of goods. Women, the handicapped and mentally unstable are disqualified because they were thought to be deficient and incapable of providing an objective representation of the facts.

There are ten categories of disqualifications. Any person belonging to one of them is not acceptable as a witness. They are:

a) women;
b) servants;
c) minors;
d) mentally or emotionally unstable individuals;
e) deaf-mutes;
f) the blind;
g) the wicked;
h) debased individuals;
i) relatives;
j) people who have a vested interest in the matter; a total of ten.

Women are unacceptable as witnesses according to Scriptural Law, as Deuteronomy 17:6 states: “According to the testimony of two witnesses.” The verse uses a male form and not a female form. [ed. Weak argument, don’t ya think?]

A tumtum [ed ambiguous genital signs] and an androgynous are also unacceptable, for there is an unresolved doubt whether they are considered as women. Whenever there is an unresolved doubt whether or not a person is acceptable as a witness, he is not accepted. The rationale is that a witness is coming to expropriate money from a defendant based on his testimony or to cause a defendant to be held liable for punishment. And according to Scriptural Law, money may not be expropriated when there is a doubt involved, nor do we inflict punishment when there is a doubt involved.

Minors are unacceptable as witnesses according to Scriptural Law. This concept is derived as follows: With regard to witnesses, Deuteronomy 19:17 states: “And the two men will stand.” Implied is “men,” and not minors. Even if the minor was understanding and wise, he is not acceptable until he manifests signs of physical maturity after completing thirteen full years of life.

If he reached the age of 20 without manifesting signs of physical maturity and on the contrary manifests physical signs of a lack of sexual potency, he is classified as a eunuch and may testify. If he does not manifest such signs, he may not testify until he completes the majority of his life, as we explained in Hilchot Ishut.

… When a child is thirteen years and one day and manifests signs of physical maturity, but is not very familiar with business dealings, his testimony is not accepted with regard to landed property. The rationale is that he is not precise about such matters because of his unfamiliarity. With regard to movable property, we accept his testimony since he has reached majority. [ed hmmm….]

A person who is mentally or emotionally unstable is not acceptable as a witness according to Scriptural Law, for he is not obligated in the mitzvot. We are speaking about only an unstable person who goes around naked, destroys utensils, and throws stones. Instead, it applies to anyone whose mind is disturbed and continually confused when it comes to certain matters although he can speak and ask questions to the point regarding other matters. Such a person is considered unacceptable and is placed in the category of unstable people.

People who are very feeble-witted who do not understand that matters contradict each other and are incapable of comprehending a concept as it would be comprehended by people at large are considered among those mentally unstable. This also applies to the people who are continually unsettled, tumultuous, and deranged. This matter is dependent on the judgment of the judge. It is impossible to describe the mental and emotional states of people in a text.

A deaf-mute is equivalent to a mentally unstable person, for he is not of sound mind and is therefore not obligated in the observance of the mitzvot. Both a deaf person who can speak and a person who can hear, but is mute is unacceptable to serve as a witness. Even though he sees excellently and his mind is sound, he must deliver testimony orally in court or be fit to deliver testimony orally and must be fit to hear the judges and the warning they administer to him.

Similarly, if a person loses the ability to speak, even though his intellectual faculties have been checked as a husband is checked with regard to a bill of divorce, he testifies in writing, and his testimony is to the point, it is not accepted at all, except with regard to releasing a women from marriage, for leniency was granted so that women will not be forced to live alone. [ed nice…]

The blind, although they can recognize the voices of the litigants and know their identities, are not acceptable as witnesses according to Scriptural Law. This is derived from Leviticus 5:1: “And he witnessed or saw,” which implies that one who can see may serve as a witness. A person who is blind in one eye is fit to serve as a witness.

Clearly, the Bible and its Talmudic interpreters (codified here by Maimonides), put women in the same category as minors and the mentally retarded. These same commentators believed that handicaps such as blindness and deafness presuppose other mental deficiencies. One must ultimately conclude that women are not required to fulfill the commandments, not because they are more capable then men, but rather because, like minors, simpletons and the handicapped, they are deficient.  Let’s not even talk about the effeminate or gay….they’re disqualified because they are … like women.

So much for apologetics. The take-away is that we are now free…. Or better yet, obligated, to update biblical law based on it’s context and intent. We neither need to apologize for the Torah’s bias, nor do we need to change the text and pretend that the Bible did not share opinions that were common in the age it was written. HaTorah dibra b’loshon benei adam. The Torah speaks in the language of people …..at the time it was written.

Once we accept this bias we can handicap the bible and move on. We can stop wasting our time splitting hairs, justifying but ultimately delegitimizing whole segments of our population, whether by gender, sexual preference or physical or intellectual handicap and begin to tackle the really big, profound issues…

Such as the question that has plagued me and other post-orthodox jews*:

Why do services at egalitarian shuls with mixed seating take so long and lack ruach?

*for a fuller exposition of this question and some viable answers, see: Empowered Judaism: What Independent Minyanim Can Teach Us about Building Vibrant Jewish Communities by Elie Kaunfer 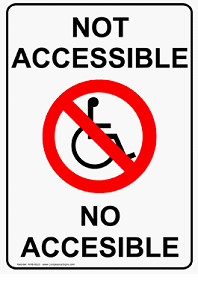 2 responses to “handicapping the bible”