to the yeshiva and back – part one

A yeshiva bachur is a young man who studies in a traditional Talmudic academy; a Yeshiva.  It is said that you can take the bachur out of the yeshiva but you can’t take the yeshiva out of the bachur.  I define myself and my relationship with Judaism in many ways. I’m post-orthodox, traditional but not halachic, evolved and evolving, but one thing I will always be; is a yeshiva bachur. Guilty as charged.

If there is one concept or disposition that I cannot shake it is Bitul Torah. Literally the nullification of Torah, but more precisely the prohibition against wasting potential Torah study time. According to no less of a source than halachipedia: “It is imperative upon a person to use his free time for Torah study. If one wastes one’s free time on useless means, one is in violation of Bitul Torah.” The very concept of time is redefined in the Yeshiva world (and it is a world unto itself) where there are texts to be studied and concepts to be argued from morning to night and every second is literally… fleeting.  The Talmud has a powerful expression to emphasis the point.

This is an early allusion to the economic concept of opportunity cost.  There is always Torah to learn and it does not wait for you, it keeps moving. You cannot return to where you left off, it has already left and gone. If you miss a day of learning you have lost both the day you could have had and the day you had.  This heightened sense of time, especially as relates to study, is for me the essence of the yeshiva and that sense has never left me.

Said Professor Saul Lieberman; when his learning was interrupted by someone asking for his time “money I have, time I don’t”.  A contribution he could make, an appearance, not so much.

In the yeshiva, learning has less to do with the knowledge gained than with the act itself.  A learned scholar who does not constantly add to his knowledge is of less worth that a less intellectually endowed student who sits and learns… day and night.  When shown a very learned businessman, Rav Moshe Shmuel Shapiro, the head of the yeshiva of my youth was unimpressed and quipped “If you know how to steal but don’t steal, does that make you a ganif (thief)? … If you know how to learn but don’t, does that make you a lamdin (learner)?” … not exactly.

The second most impactful characteristic of the bachur yeshiva is purity verging on naiveté.  A popular song, actually a chant, sung over and over again in a trance-like hora is from the Shabbat liturgy:

Purify our heart to serve You in truth

Ironically this song was also taken by the Israeli secular pioneers (halutzim) to celebrate their pure and undivided and untarnished focus on the labor (avodah) necessary to build a new land.

Such is the way of Torah: Bread with salt you shall eat, water in small measure you shall drink, and upon the ground you shall sleep; live a life of deprivation and toil in Torah. If so you do, “fortunate are you, and good is to you” (Psalms 128:2): fortunate are you in this world, and it is good to you in the World To Come.[iii]

Which brings me to my return to the yeshiva, part one.

I was near Beer Yaakov on a recent visit to Israel so I decided to return… return to the yeshiva of my youth.

As a nineteen year old, I went to Yeshiva Beer Yaakov at the advice of my cousin Aviezer Wolfson, a businessman, scholar and composer. Aviezer had studied at the yeshiva and my grandfather, Charles Wolfson and his brothers had financed the buildings and sefer Torahs at the Yeshiva.  The main attraction was the Mashgiach Ruchni (spiritual guide), Harav Shlomo Wolbe who was considered when he passed away, the last of the great Mussarniks. Rav Wolbe was a card carrying Haredi who was raised in a secular home and graduated from the university of Berlin in 1933.  He ended up (it’s a long story) at the Meir Yeshiva as a student of Rav Yerucham Levovitz a student of the Alter of Kelm a disciple of Rav Yisroel Salanter the founder of the Mussar Movement. Learning under Rav Wolbe, especially in small, by invitation only, vaadim, was a unique privilege and opportunity to be directly connected through him to Rav Yisrael Salanter, this founder of a  lesser known but unique movement that coincided with the emergence of Hasidism and the haskalah. Rav Wolbe took one student every year to study Chumash with Rashi every morning.  In my second year at the yeshiva, I was that student.

don’t ask.. I don’t remember what we were discussing…

Here are previously unpublished photos of Rav Wolbe at my Sheva Barachot with Professor Saul Lieberman (who was mesader kiddushin at my wedding).

It took me a while to find the Yeshiva.  In my day, it was isolated amongst orange groves and it’s students emerged from their isolation only once in every six shabbats to return to the civilized world.  Now it is pluck in the middle of the urban sprawl of a bustling city of Beer Yaakov, necessitating a privacy curtain (those Halutzim had built well…). 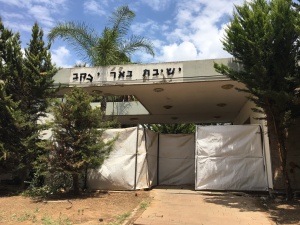 Even with all the privacy, I could already tell from the signage that the Yeshiva had fallen….  on hard times.  I couldn’t get over the fact that my isolated yeshiva was now in the middle of a city. There used to be orange groves there now it was a major thoroughfare.

Once I made my way past the privacy curtains I saw the students gathered around a printed notice on the door to the study hall.  I made my way in and read with disbelief that the yeshiva had been without electricity since the beginning of the month and the administration was pleased to announce that they had finally negotiaated a payment plan with the electric company.

According to matzav.com (The Jewish world at your fingertips) 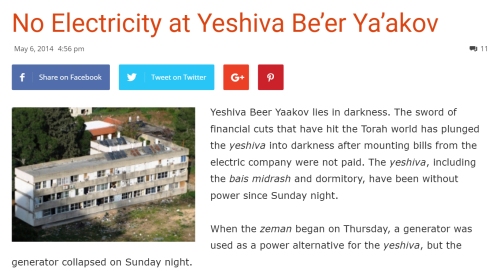 Here’s the notice posted the day of my visit on May 23rd: 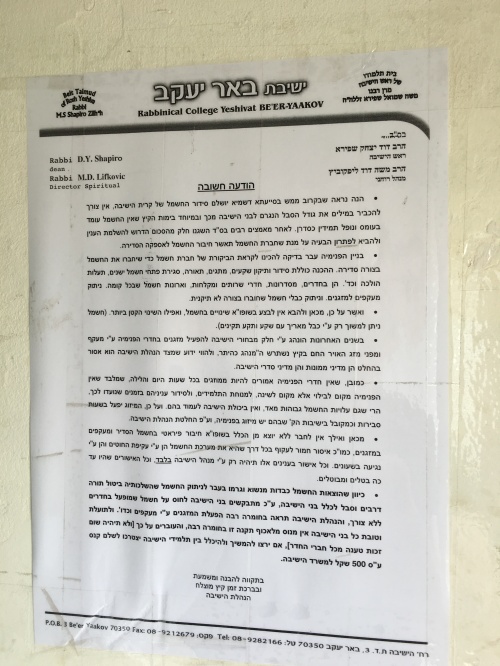 The notice thanks the students for their savlanut (patience and endurance) and thanks God for helping to craft a deal with the power authority.  That said, there are strict regulations, punishable with fines for misusing electricity for private air conditioning in the dorms.

Here’s a picture of the aforementioned generator, which in my day was used every Shabbat so that the yeshiva was not powered by electricity produced by Jews on the Sabbath.

The yeshiva baring my Uncles name was in disrepair.

But inside, I was just in time for the afternoon service.  When I pray now, I am usually one of the last to finish…  but here at my roots, I was amongst the first.  At Beer Yaakov, on a simple everyday afternoon mincha service no prayer is finished before its time… prayers are savored like a fine wine, not gobbled like fast-food. I guess that stayed with me. 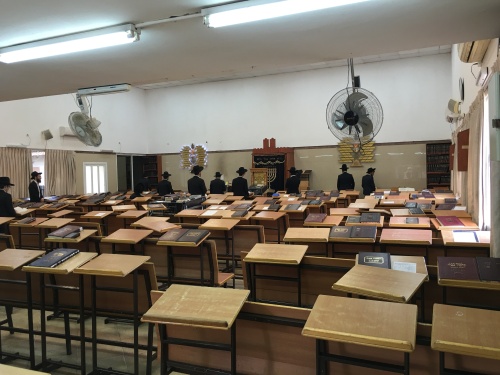 My  visit to Beer Yaakov that day was spontaneous and I was not dressed in the uniform white shirt and black pants.  I had no jacket and only my LoBa Kippah, which I turned inside out (ונהפכו).  I felt very comfortable and no one either approached me to say Shalom Alechem nor did they stare at me…. I was just another guy coming in, probably to say kaddish. I started walking around the “campus” and a student approached.  “I studied here” I said… under “Rav Wolbe” I added.  Now there was interest.  Now I was a link.  Students gathered as I described how it was and asked to see and describe the dining room and dorm as I remembered them.  “Where is Rav Wolbe’s house” I asked.  To my shock, the home were we gathered late at night for a vaad was now condemned. 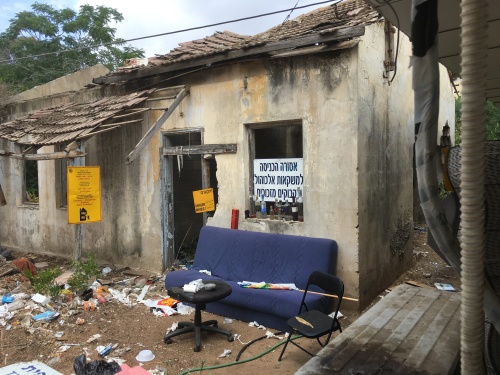 It  was sad, but maybe fitting.  The master had passed and so had an era.  The student who showed me around had the purity and simplicity that I had remembered and the food in the dining room was as sparse as I remember it…. and the Torah was being studied with only bread and water and apparently no electricity.  For me and the students, Rav Wolbe’s wisdom still echoes in the hall.  It was time for me to go.

There is much written in the agadata (non legal texts of the Talmud) about a grove (pardes) and a destroyed edifice (chorvah).  On my return to the Yeshiva of my youth I found a pardes that is no more and a chorvah that contains much of my core.  I left the Yeshiva that day.  Needless to say, the yeshiva remains in me.

[i] Sifrei on Deut. 11:22, Yerushalmi Ber. 9:5, Midrash Shmuel 1 as quoted in Rashi Deuteronomy 11:13 Similar is [the meaning of]“And it will be, if you forget” (אִם שָׁכֹחַ תִּשְׁכַּח) (Deut. 8:19): If you have begun to forget [the Torah you have learned], eventually you will forget all of it, for so it is written in the Megillah 1: “If you leave Me for one day, I will leave you for two days.”

[iii] In the name of Rabbi Joshua the son of Levi Pirkei Avot 6:4

4 responses to “to the yeshiva and back – part one”