“Reading the Bible in translation is like kissing your new bride through a veil.” famously quipped Haim Nachman Bialik.

I would love to see this quote as Bialik as published or documented verbatim and in the original Hebrew. I’m suspicious that what I find attributed to Bialik as it may just be a translation or paraphrase:

I’m sure that reading Bialik in translation is a similarly less-than sensual experience.  Did he say bride or girl, did he mean just a kiss or was he suggesting something more intimate and finally was it a veil or the proverbial sheet?  In any case, I do agree with Bialik that learning Torah can be like sex and in this regard it should not be practiced safely with an interfering translation… it should be done … in the original Hebrew.

While we’re on the subject of kosher sex, let’s consider one of the best examples of lost-in-translation in the Bible.

Genesis 26 sets the stage wherein Isaac fibs about his wife and tells Abimelech that Rebecca is his sister.

8 And it came to pass, when he had been there a long time, that Abimelech king of the Philistines looked out at a window, and saw, and, behold, Isaac was sporting with Rebekah his wife.

The Hebrew word that the text uses for “sporting” is metzahek which comes from the same Hebrew root as does Isaac’s name: listen: “Yitzhak metzahek”.  It is clear that the biblical writer, along with Isaac, was having some fun here. This is the only place[i] in the Bible that metzahek is used to imply sexual activity…. Unless, of course, we now re-read the texts associated with the original association of Yitzhak’s name with the laughter of Sarah and Abraham ….. and realize that his parents laughed at the thought of procreating a child…. (see Gen 17:17, 18:12,13 and 15 and 21:6).  So maybe Yitzchak’s “sporting” makes us realize that there was always sexual innuendo in the glee, gaiety, and amazement with a-touch-of-self-mockery that his parents, he and maybe we feel at the joy of sex. Hey.. It’s not me… it’s the Hebrew talking.

The modern day scholar who focuses most closely on the original Hebrew sounds of the biblical text is Everett Fox, who has written a translation of the Torah following on the heels of Martin Buber and Franz Rosenzweig.  Fox takes the Bible, if not as an oral document, certainly as an aural one.  Fox believes that using echoes, allusions, and powerful inner structures of sound, the text of the Bible is often able to convey ideas in a manner that vocabulary alone cannot do.  Fox argues that virtually every major (usually male) character in Genesis has his name explained by a play on words many time hinting at an eventual fate or character trait.

Let’s listen to the story of Jacob in Genesis 25:26

26 And after that came forth his brother, and his hand had hold on Esau’s heel; and his name was called Jacob. And Isaac was threescore years old when she bore them.

The association of Jacob – Yaakov with a heel is strange.  Jacob is not the only mythical hero with a famous heel, but in Achilles case, he was the owner of the heel.  Jacob’s relationship with his brother’s heel is vicarious.  If the biblical author, let alone his parents, want to be flattering, they do a lousy job.   Jacob is to be known, at best, as a “hanger on”. Fox’s translation: “Heel-Holder”

Even if we choose to think of Jacob as a bootstrapper, we can’t forget that he pulls himself up by a bootstrap attached to his brothers heal.  And let’s not forget that Esau’s heal, like Achilles, is his most vulnerable body part. Metaphorically, the heel[ii] is the exposed rear of an army (see Joshua 8:13 and Genesis 49:19).  When God curses the snake for tempting Eve, it is on the snake’s metaphorical heel that man shall forever stamp (Genesis 3:15).  Attacking an enemy’s heel is an insult to both the attacker and the victim.

Our unflattering association is echoed by Esau himself latter in the story.  After Jacob steals the birthright, Esau taunts (Genesis 27:36):

And he said: ‘Is not he rightly named Jacob? for he hath supplanted me these two times: he took away my birthright; and, behold, now he hath taken away my blessing.’ And he said: ‘Hast thou not reserved a blessing for me?’

Here Ekev-heel is used in the sense of “to throw one down, to trip one up, to supplant, to circumvent, to defraud.[iii]  Fox’s translation: “Heel-Sneak”. Check out Jeremiah 9:3

Take ye heed every one of his neighbour, and trust ye not in any brother; for every brother acteth subtly, and every neighbour goeth about with slanders.

Jeremiah is pulling no punches, he uses “ekov Yaakov” the “heel of Jacob” as a synonym for acting subtly.

What kind of parents would the biblical author have Isaac and Rebecca be?  Who gives a child such a name?

Clearly, Jacob is in need of a name change… and in fact, this is what happens after he wrestles with the Angel at the River Jabbok (literally: wrestling river).

There is nothing flattering that one can say about Yaakov’s name.  His name can only portend a change.  A change from a swindler, a scrapper, a kniver… someone who by choice or circumstance is forced to steal his blessings and eke out a living and a life.  Yaakov is the outsider, the Ghetto Jew, but his name portends another name, where he crosses the river into his homeland and can stand on his own feet and pull himself up from his own bootstraps … attached to his own heel.  This is what hopefully lies ahead for him in his future name and this is what presumably is up for grabs in the blessing that he steals.

3 Sojourn in this land, and I will be with thee, and will bless thee; for unto thee, and unto thy seed, I will give all these lands, and I will establish the oath which I swore unto Abraham thy father;

4 and I will multiply thy seed as the stars of heaven, and will give unto thy seed all these lands; and by thy seed shall all the nations of the earth bless themselves;

5 because that Abraham hearkened to My voice, and kept My charge, My commandments, My statutes, and My laws.’

The word translated as “because” is our old friend “ekev”[iv]. Used in this fairly rare sense, it has the sense of “as a consequence, a gain, a reward, end”.  It is that which results from a long, tedious, painful, tortuous and circuitous journey. A pilgrimage full of blisters and maybe a touch of plantar fasciitis.  Esau, might have been, like Achilles, the golden boy and favorite son and Yaakov, the parasite, but Yaakov struggled with what little he had.  Esau may have been well heeled, but Yaakov had the fortitude and faith in a God of history to grab steadfastly for a better future[v].  He deserved the blessing… it had his name on it.

Listening to the lyricism of the words in the original Hebrew and opening our ears to the playful and suggestive way the writer weaves one word; ekev into the narrative, we can do what Fox[vi] suggests we do; move explanation and commentary from the footnotes, back to the body of the text and in so doing.. we can finally… kiss the bride. 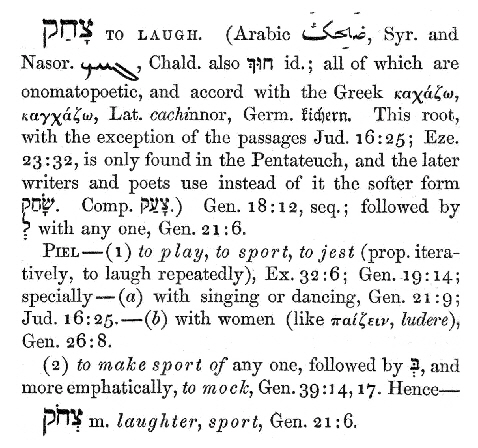 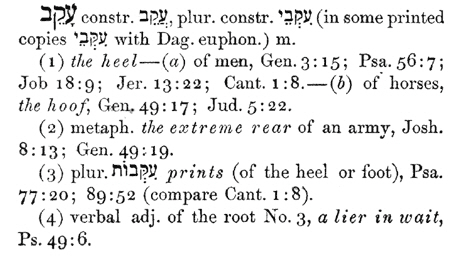 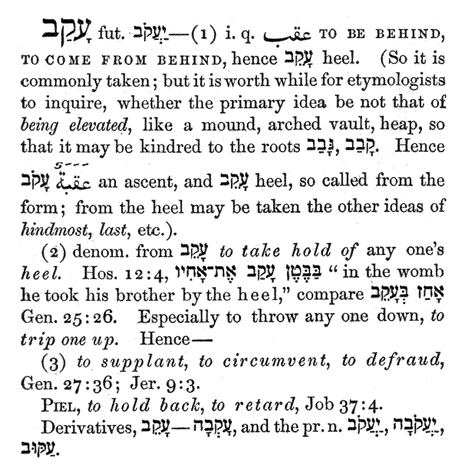 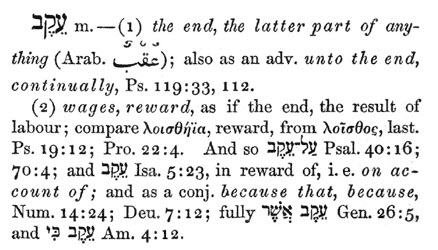 [vi] Although I must admit that Fox does not pick up on the ekev of the blessing, possibly because it does not appear directly in the blessing, but in the patrimony preceding and in the narrative.  I would argue that it is nonetheless intentionally placed in the literary piece. 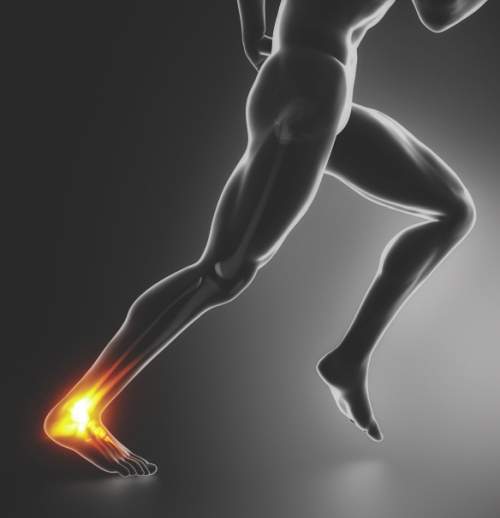