getting ready for passover

In the category of Jewish-Christian Dialogue, the award for the best back-handed compliment goes to Pope John Paul II who in 1986 went to a Rome synagogue to pray with the city’s Jewish community. Noting Christianity’s unique bond with Judaism, he said, “You are our beloved brothers … you are our elder brothers” in the faith of Abraham. (see: Catholic News). More recently, Pope Francis described the Jewish people as the “big brothers” of his Roman Catholic flock in words of solidarity marking the 75th anniversary of Kristallnacht.

Why a compliment? Because we Jews are raised with a conceit… that Christians cannot possibly understand their religion without understanding Judaism, the religion of Jesus. We may be a minority and have been oppressed, but when all is said and done, our religion preceded and gave birth to Christianity… the two popes exploited this conceit.

Why a backhanded compliment? For those familiar with the Hebrew Bible, you know that the God of the Jews favors the younger brother.. from Cain and Abel until King David and on….

For a complete analysis of the history of this birth-order election tug-of-war see the brilliant: Two Nations in Your Womb: Perceptions of Jews and Christians in Late Antiquity and the Middle Ages by Isræl Jacob Yuval.

Why the Award and why now? Now that Christianity and Judaism are getting along so well, we can both agree that neither religion can achieve self-awareness without understanding the other. Both religions can lose their conceits and sense of election and need to admit that they both do not have a well thought out theology which includes the other. *

As Daniel Boyarin argues in his book Border Lines: The Partition of Judaeo-Christianity, both Rabbinic Judaism and Christianity were created in the chaos formed by the loss of the temple and the Jewish Commonwealth in the first centuries of the Common Era. And…. it turns out, both “religions” increasingly defined themselves in counter distinction to the other.

For the purposes of the present discussion, what this means is that both faiths jettisoned beliefs held by the other. So in his more popular book, The Jewish Gospels, Boyarin argues that if the early Christians were looking to convince Jews of their authenticity, it would hardly make sense to cite unheard of concepts and novel ideas to prove that they were the true heir to the throne. If they claimed that Jesus was divinely born and/or needed to be sacrificed, Boyarin argues, that must have been the expectation of the general Jewish population of the day. Similarly, if early Christian Jews claimed that the Godhead had multiple manifestations, then this belief must have been resident among fellow Jews. And in his writings, Boyarin proves that these beliefs were in fact, held by Jews of the time.

As the break between the two religions grew over time, the border lines became less porous. Previously common beliefs, rituals and traditions were divvied up as in a zero sum game.

So the two Popes have my appreciation for reminding me of a once important thread in my tradition, the election of the younger brother, which we jettisoned at the border and had forgotten about to the point where most of us smile with appreciation when we’re referred to by the leader of the Catholic Church as the older brother.

The two Popes get my appreciation, because in our new world where hostilities have ceased and Jewish Christian dialog is fashionable, we Jews are now free to roam around the Gospels (and the rest of Christian scripture, liturgy and literature) to reclaim customs, traditions, rituals, expressions, beliefs and even polemics that we discarded and buried long ago in what I call the Gospel Geniza.

In my next post we’ll explore this treasure trove, hiding in plain sight, for Jewish artifacts that impact the Passover celebration.

Here are some entrées to whet your appetite:

Shabbat Hagadol – see John 19:31 (megalē μεγάλη which means: large, great)
Hametz – See Mark 8:15 “the leaven of the Pharisees and of Herod” and the connection between purging leaven and repentance.
Afikomen – broken and hidden, a symbol of the messiah and a lost polemic 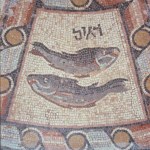 * i.e Christians, especially Catholics, have not fully worked out how their older brother need not be rejected and replaced by the younger brother for their new testament (covenant) to be valid, and Jews have not expanded their rudimentary category of natural religion (Noachide Religion) to include other eschatological monotheistic religions such as Christianity which have valid but alternative conceptions of the Godhead and end-of-days.

2 responses to “the gospel geniza”